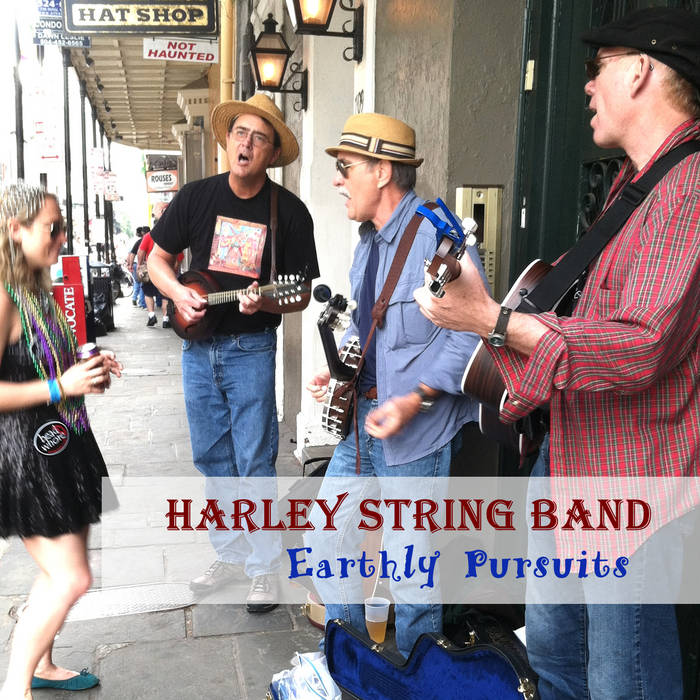 Two ecological disasters
One murder ballad
One public hanging
One ode to a Mayan god
No love songs. (Well, one, sort of)
…and One Hollies cover

Ah, but we’ve only scratched the surface of “Earthly Pursuits”. If you’re getting the picture that this is not a typical string band, you are correct. The Harley String Band is a trio of bold singer-songwriters who just happen to favor banjo, mandolin, and bouzouki in support of their adventurous songscapes.

The featured track, “Deepwater Requiem” presents the Gulf of Mexico drilling disaster as an epic poem, focusing on the workers who paid the ultimate price. A Great American Song Contest finalist, the song begins as a sea shanty and then gathers an intensity befitting a movie soundtrack. File this ambitious cut next to “The Wreck of the Edmund Fitzgerald.”

To put some pins in the genre map, aside from the occasional nod to Trad and Appalachia, you’ll find HSB primarily in the Americana singer-songwriter bucket. (Think Townes van Zandt, Gordon Lightfoot, Gillian Welch). Their penchant for minor key narrative suggests the influence of Celtic troubadours such as Al Stewart and Richard Thompson. The British invasion is clearly audible in their song structures, vocal arrangements, and in the album’s only golden chestnut: the Hollies’ “Look Through Any Window.” Sonically, the bass-and-drum-free arrangement evokes ‘60s Folk Revival.

Jim Johnson: Guitar, Banjo, Vocals
Jim Clark: Irish Bouzouki, Guitar, Vocals
Steve Coffee: Mandolin, Guitar, Vocals
Produced by the Harley String Band, 2015 Recorded and mixed at Cue Studios, except Maximón, recorded by Gary Jaffe and mixed by Eric Waters. Mastered by Mike Monseur at Bias Studios. All songs self-published. All rights reserved. Lyrics and more at www.harleystringband.com. Maximón illustration by Rodney Parsons. Cover photo by Bead Whore’s friend. Other photos by Steve Coffee. The band would like to thank the Songwriters Association of Washington, The Folk Club of Reston-Herndon, Ron Goad, Sean Russell, Ken Schubert, Eric Waters, Gary Jaffe, and the Cofradia of Santiago de Atitlàn. Steve would like to thank his womenfolk. Finally, thanks and appreciation to the songwriters who have inspired us over the years.

The Harley String Band is a trio of bold singer-songwriters who just happen to favor banjo, mandolin, and bouzouki in support of their adventurous songscapes. Jim, Jim, and Steve are old enough to remember when folk music was considered important and relevant, and they work to meet that expectation. ... more

Bandcamp Daily  your guide to the world of Bandcamp